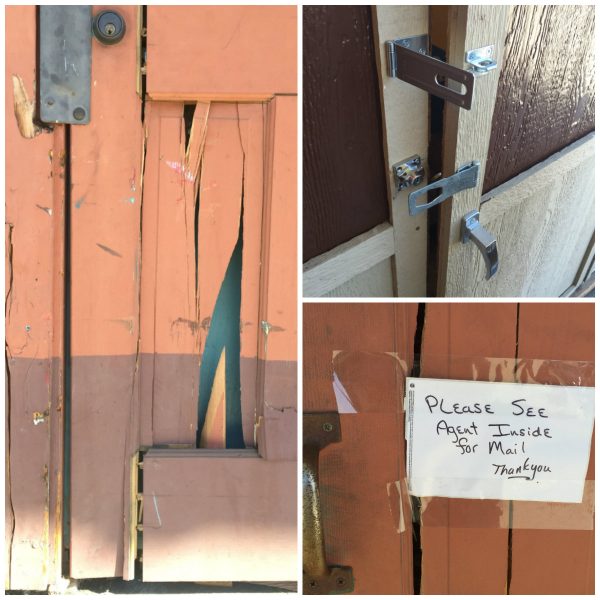 Damaged doors at the Petaluma Mail Depot and Milt’s Coffee.

Sometime last Saturday night, several items were stolen from Milt’s Coffee, the beloved local coffee stand adjacent to the Petaluma Mail Depot. The crime is one of several recent issues in the 4th and C Streets area.
Milt’s proprietor Sarah Gorman arrived on Sunday morning, September 26, to paint the shed-like structure, which previously had been tagged by vandals. That’s when they discovered that someone had jimmied the door open. The small structure was ransacked and missing Bluetooth speakers and a Polaroid camera among other property. An apparent attempt to remove the water heater was abandoned. In all, Gorman estimates that there was about $300 to $400 worth of damage and lost property. At press time, she was filing a report with the Petaluma Police Department.

On the Sunday prior, an unknown driver appears to have rear-ended the external mail access door on the landmark building. The door was destroyed and traces of red car paint were found among the splinters. Petaluma Mail Depot owner and local arts impresario Maureen McGuigan was nonplussed.

Would-be mail vandals should keep in mind that mailboxes are considered federal property. Federal law (Title 18, United States Code, Section 1705) makes it a crime to vandalize them or to injure, deface or destroy any mail deposited in them.

Other recent issues include public defecation near the structure and people sleeping in the nearby children’s play area.

Both businesswomen expressed exasperation with the recent uptick in crime in the area but are optimistic that new area patrols will address the problems.

“Supposedly, they’re going to do a little substation down at Walnut Park because there’s been a lot of stuff happening in the park,” said Gorman. There are plans afoot to convert a maintenance and storage building into a place where law enforcement can create reports, make calls and generally serve as a police presence. The effort is expected to launch within the month.

“It was kind of weird,” Gorman says of discovering her business in shambles. “I’m going to burn sage in here tomorrow,” she says with a hopeful smile and a laugh.

To file an anonymous tip with the Petaluma Police Department, click here. Otherwise, call the station at (707) 778-4372.