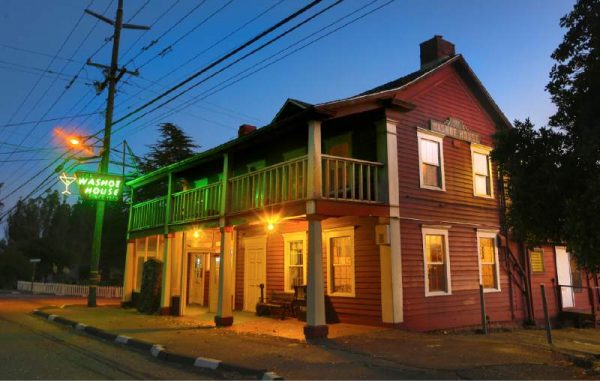 Haunted Places in Petaluma: The Washoe House has a history of unexplained phenomena.

Spirits are high this Fall – if not from the election drama, then from the glasses of spirits raised to nullify its effects. But there are other spirits that come to mind this time of year – the kind that Douglas M. Carnahan, founder of Norcal Paranormal Investigators (NPI) has made a career pursuing. He’s the man to ask if there are haunted places in Petaluma.

Over 30 years Carnahan has conducted approximately 600 investigations into the paranormal, supernatural and other things that go bump in the night. Recently, he brought his five-person crew, their gear and their guts to the historic Washoe House for an overnight investigation.

A man named Robert Ayres built the house on Stony Point Road in 1859 and it soon became a popular stagecoach stop between Petaluma and Santa Rosa. At some point, however, unexplained phenomenon began to occur. Employees through the decades have encountered mysterious footsteps, eerie presences and the occasional full-blown apparition. Despite all this otherworldly activity, a formal paranormal investigation had yet to be conducted. NPI was more than happy to be the first.

Who You Gonna Call?

“A lot of investigations come from people at their wit’s end. They’ve tried to have other people help them out with no success and they come to us a last resort,” explained Carnahan, whose dramatic presence is TV-ready, should the opportunity arise. He suggests that most disturbances are the result of “residual energy” that play out like a broken record.

The repetitive nature of certain hauntings aside, the crew itself often witnesses events that are definite firsts. Some are crew veterans, others are still training – Brian Clark, a mohawked Petaluman on photography duty, was on his 20th investigation.

“I’ve seen things, I’ve been talked to, I’ve been responded to, I’ve heard my voice being called back on recorders,” says Clark, who uses digital recording instruments to capture “electronic voice phenomenon.”

“I was sitting in the bar area and asking questions,” Oakey recounted a few days after the investigation, “when all of a sudden a really cold gust of air came across myself and Jason.”

No one had opened any doors or windows she pointed out, yet, as she explained, “You could feel the temperature change and the breeze go across you.”

Likewise, Clark took a couple of photos contain what appeared to the crew as photographic evidence of the landmark’s paranormal activity.

“In one photo is an apparition from the torso up of a balding gentleman standing near the window. You can totally see him and you can see right through him,” says Oakey.

Whatever is in the photograph will undergo more scrutiny by the professionals at NPI.

“We have to debunk it just like anything else,” reminded Carnahan. “Not all of them are demonic as everyone often thinks and thank God for that.”