Paging Dr. Strange: When You Share Your Name With a Superhero 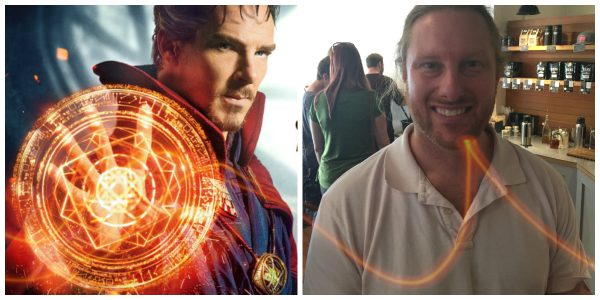 The latest offering of the ever-expanding Marvel Cinematic Universe, “Dr. Strange,” is currently enjoying its second week at the top of the box office. This is good news not only for our Boulevard Cinemas but for perhaps for a member of our medical community as well – who is also known as Dr. Strange.

Petaluma’s amiable Dr. Nicholas Strange, DO, is a family medicine doctor and Doctor of Osteopathic Medicine more likely to be portrayed by, say, Owen Wilson in the motion picture version of his life, than Benedict Cumberbatch who plays “Dr. Stephen Strange” in the new superhero movie. Naturally, Petaluma’s Dr. Strange knew the movie was on the horizon and now that it’s blockbusting at the local cinemas he’s come to a comic conclusion:

“I should’ve gotten paid a little bit more,” jokes Dr. Strange. His patients also seem to be enjoing the name game. “It’s not often that you get people choosing you based on your last name,” says Strange, who adds the movie has been good for business.

Of course, Marvel’s “Dr. Strange” and Petaluma’s Dr. Strange have distinctly different practices. In the film, Dr. Strange is a brilliant if arrogant neurosurgeon who gets into a texting-and-driving accident and wakes to learn his fine motor skills are kaput. Traditional medicine fails him so he turns to the East (where else?) and he meets a mystical sorceress who introduces him to “other ways to save lives.” Most of these techniques involve turning the spacetime continuum into a carnival funhouse and besting meddlesome malcontents in what amounts to a series of Escher-esque acid flashbacks.

So, yeah, basically the average workday of a Petaluma physician.

As a surname, “Strange” is English by way of France. As one might assume, it originated in the Old French as a nickname for a newcomer to a region as in “estrange. Early evidence of the name in English first appear in Norfolk on the Eastern side of England, having been introduced after the Norman Conquest over a thousand years ago.

For Dr. Strange, “it provided it’s challenges” growing up but it’s served him well both personally and professionally since. And now he shares the moniker with a transdimensional time traveler, which begs the question, “Do you have the same superpowers?”

“Only with the eye,” he quips, referring to a talisman his onscreen doppelganger that enables his inter-dimensional derring-do. Dr. Strange then adds with a smile, “I’ve always been a fan of the comic book.”