To Whomever Stole this Totem Pole – Bring it Back! 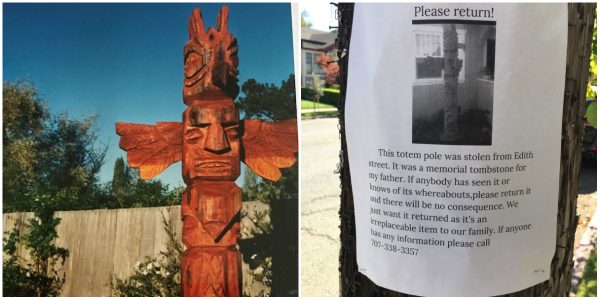 From the totem pole to the telephone pole: The owner of the stolen heirloom seeks its return, no questions asked.

Sometime Friday, Sept. 30, an imposing, hand-carved totem pole was stolen from the front yard of a home on Edith Street at East D. The nearly five-foot-tall totem was more than a mere lawn ornament, says the Vikki James, it was a “memorial tombstone” for her father, a Native American craftsman who created custom wood interiors in his Sausalito shop for clients such as George Lucas.

“When he passed, I chose to have the totem pole made in honor of him,” recounts James, who has posted fliers with an image of the totem pole and the plea “Please return!” The flier also invites the return of the item with the proviso there will be “no consequence” for doing so.

“Somebody took it right from our yard,” says James, who is presently undergoing chemotherapy for breast cancer. “It was pretty devastating. I’m pretty upset about it.”

Ten days ago, James had returned from receiving one of her treatments when she noticed the totem pole was no longer affixed to the stump in her front yard where it had stood for 15 years without incident.

Occasionally, people would recommend that James move the totem pole but she was reticent for a variety of reasons, not least of which because she placed portions of her father’s and mother’s cremated remains upon it.

“We put them up on top of the pole and just let the wind take it away,” says James. “It just has more meaning.”

Moreover, she wanted others to also experience the grandeur of the monument, which she commissioned after her father’s death and which originally was on her parents’ property in Calaveras County.

“‘Why, should I move it,’ I would say. It’s such a beautiful piece; I want people to enjoy it,” says James. “I’ve had people pray to it, I’ve had people come by to look at  – it’s been in the Petaluma Magazine.”

The California Indian Museum and Cultural Center once expressed interest obtaining the totem pole as a donation, according to James.

“They checked out the history of my father and everything and they were very interested,” James recalls. Ultimately, she decided to decline because she regards it as an heirloom for her five children and grandchildren.

In the meantime, James has received kind offers from her neighbors and others concerned over the theft.

“I had an Indian gentleman show up who offered to ‘reincarnate’ a totem pole for me, and then I had another gentleman offer his totem pole to me,” she says. “I just think it’s amazing that people are reaching out like that. It was pretty impressive. I didn’t even know what to say. I mean, as much as I would love for that to happen, it’s just, you know, it’s just not the same.”

To leave an anonymous tip with the Petaluma Police Department regarding the stolen totem pole, call (855) 847-7247 or visit cityofpetaluma.net/police. To reach Vikki James directly, call (707) 338-3357.