Once a year in Sonoma County, people waltz into artists’ studios, pluck artwork off the wall and leave with it. Nope, it’s not a ring of ingeniously undemanding art heists or a home invasion burglary wave perpetrated by interior designers. It’s Sonoma County Art Trails, the annual open studios tour whereupon members of the public are invited to visit artists in their natural habitats and perhaps even purchase their work.

Presented by Sebastopol Center for the Arts, on October 8, 9, 15 and 16, our fine burg of Petaluma boasts 22 of its own local artists representing an array of mediums. Most of these artists, however, are located on Petaluma’s west side. In fact, the east side claims only a single participant – award-winning nature, cityscape and travel photographer Robert D. McFarland.

“I’ve been here, alone, for about three years now,” says McFarland, who isn’t sure what happened to his fellow east side artists. “We used to have two or three others, but they’ve dropped by the wayside.

They’ve at least dropped off the map. Literally.

The lone red dot that symbolizes McFarland’s studio on the Art Trails program looks like a desert atoll where one might test an H-bomb given that it’s a relatively “safe” distance from the archipelago of artists clustered on the west side. A legend on the map reminds that the “Map is NOT to scale,” which is understandable since an accurate depiction would place McFarland’s studio a couple of pages away from his Petaluma colleagues (the nearest of which is four miles away). 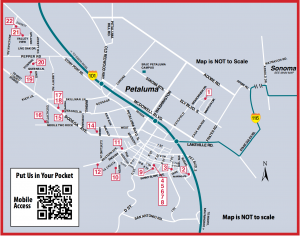 Photographer is Fine Art Trails and His Location

This doesn’t seem to bother McFarland who’s more concerned with pursuing his passion than worrying about the frustrations of cartographers. And, for the record, attracting people to his studio to enjoy his striking imagery has never been a problem.

“My real passion is nature and it’s beauty and attempting to capture that beauty and share it with others,” he says.

Four years ago, McFarland made the switch from film to digital photography.

“I held out for a long time,” he laughs. The switch didn’t alter his aesthetic so much as make available new subjects – particularly birds.

“When you shoot film you can shoot a whole roll of film of birds and maybe get one. They’re too fast and they move and other things happen,” says McFarland. “You can capture ‘documentary’ kind of scenes or you can attempt to capture the beauty and the mood that’s created by the bird. It’s really two different kinds of things and it’s easy to capture the ‘documentary.’ It’s very hard to learn how to see and find a strength within an image that expresses, through its composition, the energy that’s in the frame and that captures the beauty.”