FYI, The Petaluma Cemetery Walk Is Not About Zombies 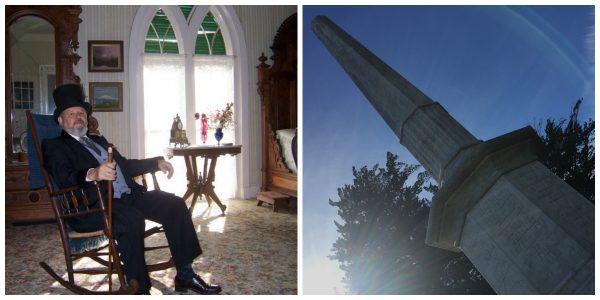 Left: Marshall West in period dress for the Petaluma Cemetery Walk. Right: The obelisk at the McNear Circle.

A local group of history aficionados are giving new meaning to the term “walking dead.” Not only can they talk the talk, in costume as an array of local historical figures, they will walk the walk this Saturday as part of a 90-minute Petaluma cemetery walk.

But they’re not zombies. The annual tour is conducted by the Petalumans of Yesteryear, who dress in period costumes and bring Petaluma’s past to life by portraying real-life local characters.

The original group cohered over a decade ago and has since grown as additional members have taken on performing as a variety of erstwhile Petalumans. The latest to join their group of dead denizens is Brainerd Jones, the architect who designed the Carnegie library that is now the Petaluma Historical Library and Museum, who died in 1949.

“It’s kind of grown over time,” says Marshall West, a longtime participant and local history buff. “Our original group started in 1999 and we had a couple of people and now we’ve got like 12.”

West’s admonition notwithstanding, the notion of strolling through a graveyard emulating the deceased Petalumans may still raise some hairs on the backs of necks. West, however, prefers that it raises hands for questions.

“It’s usually quite a number of people who come out,” says West. “Some are brand new to Petaluma, and they want to learn more about who lived here. Then you got the old-timers that have some relationship to some of us, maybe, their great-great grandfather, whatever,” he says.

Readers may notice that West refers to the personalities he and the other Petalumans of Yesteryear embody as “us” and “we” – such is the totality of their commitment to the endeavor. It’s worth it says West, especially when students attend the event. This year will see 11th grade  history students from Casa Grande High School joining the tour.

“This term they are doing a piece on older Petalumans so they want to come and kind of study and get notes and stuff,” says West.

The walk will congregate at the cemetery offices and then proceed to McNear Circle (not the street but the burial site), where Petaluma’s most name-worthy founding family is buried in a large family plot topped by an obelisk. “Clara McNear” will be on hand to discuss her family’s illustrious backstory.

“She’s going to speak for all of the Mcnear’s up at the Mcnear Circle,” says West. “It’s more history-oriented – we talk about our lives, who’s buried there and their relationship to who we are. We touch a lot of the graves as we walk,” says West, who says the tour wraps up at the gravesite of William Howard Pepper, who perhaps is best known today as a proponent of early education in the 19th century (Pepper School Alley bears his name as a result).

It should be noted, as West is quick to emphasize, that the cemetery walk is a history – not Halloween – event.

“It’s not meant to be a Halloween thing at all,” says West. “It just happens to be in October.”

The Annual Cemetery Walk at the Cypress Hill Memorial Park in Petaluma will take place this Saturday, October 22. Start time is 10:30 AM. For more information, contact the Petaluma Historical Museum at (707) 778-4398 or visit petalumamuseum.com.