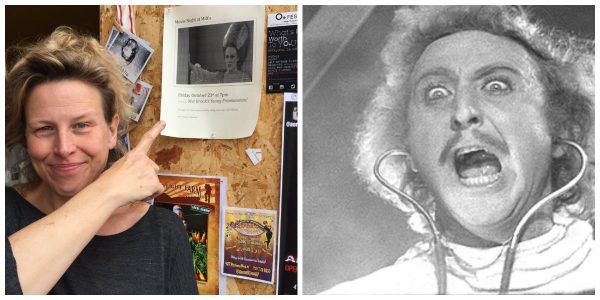 The screens went dark on Petaluma’s drive-in movie theaters decades ago but one local coffee entrepreneur is bringing something of the Friday night tradition back – albeit without the cars. And it may become a Petaluma Halloween tradition.

“It’s something that I’ve wanted to do down here since I’ve been here,” says Sarah Gorman, the owner of Milt’s Coffee, next to the Petaluma Mail Depot at 4th and C Streets. Gorman reminds that the depot’s proprietor, Maureen McGuigan, has hosted events in the adjacent parking lot over the years, which led to the idea.

“I’ve really enjoyed coming to those and the movie thing is something we thought we’d love to do,” says Gorman, who regularly hosts screening parties at her home studio, which can double as an occasional cinema – projector and all.

“It’s big – it’s fun on the big screen, so I thought we would do it down here,” says Gorman, whose first foray in “walk-in cinema” will feature a free screening of the 1974 comedy classic “Young Frankenstein.” The selection is in part a tribute to the recently departed Gene Wilder, the film’s titular lead, as well as a Gorman family tradition.

“We used to project it on the side of the house as the trick-or-treaters were coming up,” says Gorman. “We also dressed up as the cast one year,” she laughs.

For those unfamiliar with the film, the rollicking comedy is an homage of the famed Boris Karloff vehicles produced by Universal Pictures during the 1930s. In director Mel Brooks’ redux, renown medical lecturer Dr. Frederick Frankenstein (which co-writer and star Gene Wilder insists on pronouncing “Fronk-en-STEEN) learns that he has inherited his infamous grandfather’s Transylvanian estate. At the castle, curiosity lures the younger Frankenstein into recreating his grandfather’s experiments assisted by Igor (Marty Feldman), Inga (Teri Garr) and the formidable Frau Blücher (Cloris Leachman). Comedic complications ensue when he creates his own monster (Peter Boyle) and his overly-dramatic fiancée (Madeline Kahn) arrives.

Gorman will have popcorn and hot chocolate available. Likewise, Milt’s Coffee will remain open so patrons can also order their cappuccinos and lattes. Viewers should dress warmly since the screening is outdoors (though there’s no need for puttin’ on the ritz).

Milt’s Coffee is located next to the Petaluma Mail Depot at 40 4th Street, Petaluma. For more information, call (707) 338-7649. Karen Hess contributed reporting to this piece.