Eyeball Art: What Happens When Art Looks At YOU

Shakespeare may have coined the term “eyeball,” (it was Prospero in “The Tempest,” Act One, Scene Two, if you have to know) but it’s local arts impresaria Drew Washer who created “The Eyeball Show.”

As part of an exhibit at the Back House Gallery at Heebe Jeebe that runs through August 9, Washer invited artists to submit visual and sculptural artwork that evoked an eyeball. Her inspiration for the show came to her as a vision – literally.

“I was waking up from a deep sleep and all I could see was the back of my eyeballs,” recalls Washer, an artist herself, who subsequently created her own rendering of the image. “I had to get up and do a eyeball and thought it would be a great show – the universal eyeball, the unconscious or the ‘third eye…ball,’” she deadpanned.

If you think artist Stanley Mouse had a lock on eyeball art, the exhibit will make you take another look. Among the artists who joined Washer in pursuit of ocular originality is Petaluman Jennifer Tatum.

“I’ve been wanting to experiment with putting resin into petri dishes and layering ink within them,” says Tatum who took the opportunity to create, among other experiments, a series of unblinking eyes staring back from the south wall of the gallery.  After four layers of resin, the Tatum’s images seem to have their own depth perception.

“The petri dishes are ideal because they have a lip that holds the resin,” she explained. “Most of my pieces are on wood, on paper and then adhered to wood and the resin pours over the edge.  So, this is kind of nice to have it contained.” 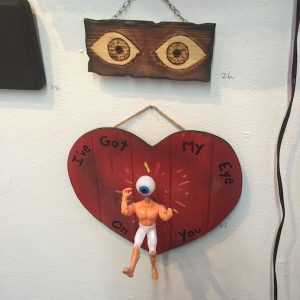 Comedian-turned-artist Mike Watts sources his inspiration from what he can spy in his home.

“The idea is always just to use materials that I have around my house,” says Watts. “I use found materials or just junk I keep around. His piece, “I Got My Eyes On You,”

“At first the idea was going to be a statement about politics – like Big Brother. I wanted to put this big lamp with an eyeball on it that looked out at you but I couldn’t find like a Donald Trump doll to put the eyeball on top of,” he laughs. Watts compromised and used an action figure topped with a toy eyeball where its head might be. The result resembles a member of the eyeball-headed art rock group The Residents but with a luchador’s body. However, the artistic vision remains the same:

“Mainly, they’re just  pseudo-statements on what’s going on. I like the parody on the word ‘eyes’ as well as making something that’s kinetic and can move so there’s some interaction,” says Watts, who considers his work an elaborate form of recycling and relishes giving otherwise discarded objects “a second life.”

And, naturally, seeing is believing. 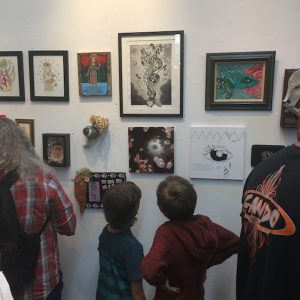 The Eyeball Show continues through August 9 at The Back House Gallery at Heebe Jeebe, 46 Kentucky St., Petaluma. For more information, visit Facebook.com/TheBackHouseGallery.