What’s With All the Irish Wolfhounds in Petaluma? 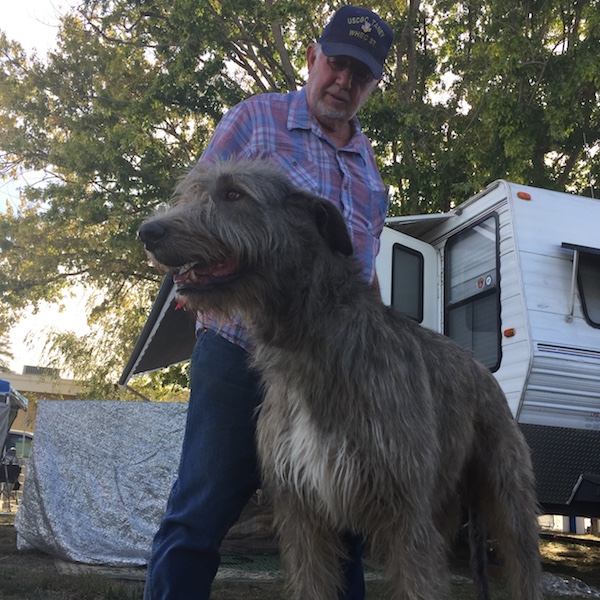 Ken Gabriel with Phoenix, a champion Irish Wolfhound in Petaluma this weekend.

Those strolling around Petaluma this weekend, particularly near the fairgrounds, may notice a preponderance of large, shaggy-haired dogs loping around. And “large,” in this context, is an understatement. These waist-high dogs are the veritable gentle giants of the canine world. Unless you’re a wolf…

You can thank the members of the Northern California Irish Wolfhound Club for bringing the dogs to town. The NCIWC is dedicated to the preservation and promotion of the formidable breed and is hosting its 36th Specialty Show, this weekend, at the Sonoma-Marin Fairgrounds, 175 Fairgrounds Dr., Petaluma.

Additionally, the Irish Wolfhounds will also participate in the organization’s 19th Obedience Trial, its 10th Rally Trial and an American Sighthound Field Association Lure Trial in which the dogs chase a mechanically operated lure through a course. It’s a busy weekend for the ancient breed, which some historians suggest was first brought to Ireland around 600 BC.

The American Kennel Club consider the Irish wolfhound to be the tallest of all dog breeds and describe them as being “of great size and commanding appearance.” It’s no wonder they earned themselves a place of the coat of arms of early Irish kings, sharing the honor with the iconic shamrock and harp.

“They’re very large and very docile,” says Ken Gabriel who was lounging between events with his dog Phoenix, a four-year-old champion in lure-coursing. “And they love kids.”

Gabriel’s relationship with the breed began 42 years ago thanks to his in-laws who had a kennel in Santa Rosa, CA. His wife was raised with Irish wolfhounds as a significant feature of her youth – a passion she maintains.

“I married into it,” laughs Gabriel, who says that wolfhounds got their name from their former vocation abating wolves rather than a resemblance. 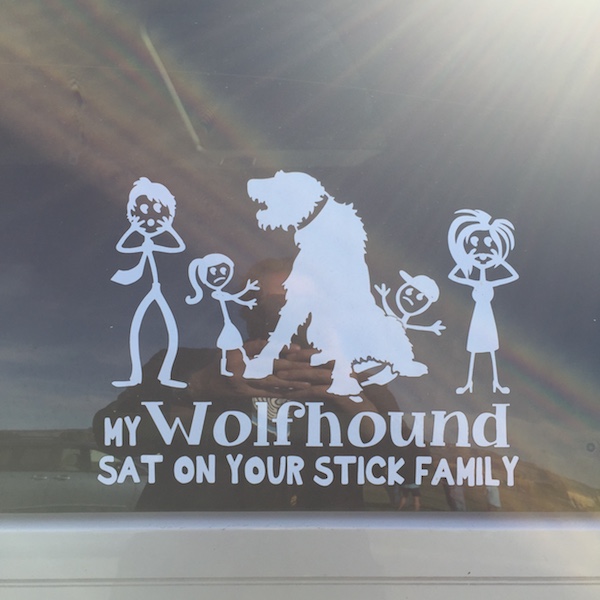 This window decal says it all.

Wolfhounds in Petaluma: Gentle When Stroked, Fierce When Provoked

Despite their size, the hounds behave so gently (at least in their off hours) that one might assume the majestic beasts rid Ireland of wolves through sheer intimidation.

But don’t be fooled. The big hound was traditionally used to hunt deer, boar and elk (in addition to wolves), and were trained as war dogs that proved adept at bringing horsemen and charioteers to the ground. 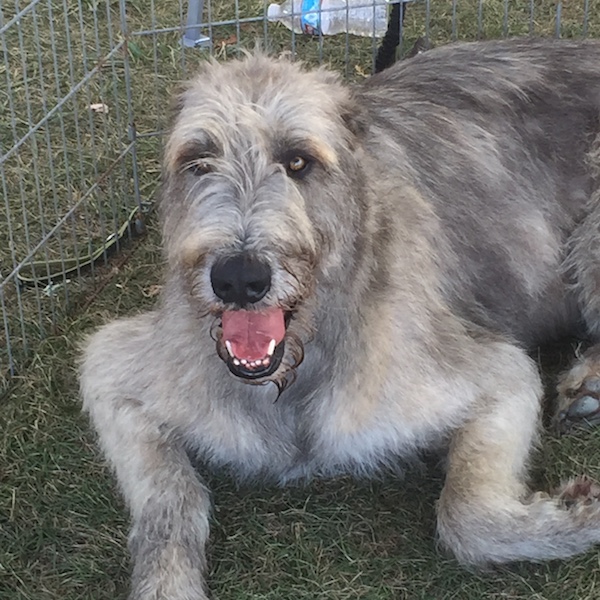